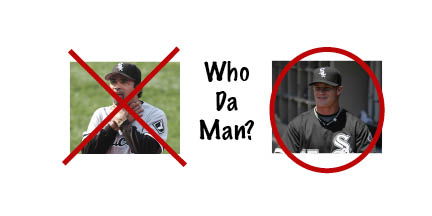 One thing’s for sure, while Ozzie Guillen is the manager of the White Sox, “no one is the man!” Which leads us to our new weekly article called “Who’s Da Man?”

Who’s Ozzie calling out this week; it’s the White Sox savior, Gordon Beckham, who did not play last night. Guillen sat Beckham last night in hopes of letting “Bacon clear his head.” Ozzie could not let it go at that, he had to lash out at the press about pressure being put on Beckham by fans and the media.

“It’s not easy to handle that, and I hope that his struggles right now don’t carry on to him to be the man. He’s not the man, and he never will be the man. As long as I manage this ballclub, no one is the man.”

Ozzie I ask you this, do you think maybe you are preventing “Bacon” from being the man? First, he came up and was forced to play third, where he adapted quickly and had a great rookie season. Instead of moving back to his natural position at shortstop or leaving him at third for his sophomore season, you decided to move him to second. Ken Williams and you see some untapped potential in Alexei Ramirez as a shortstop that no one else can see. His best year as a White Sox player was his rookie season at second, yet we hear stories about Ramirez getting to balls that Beckham could not get to and making plays that Beckham can not make yet Ramirez continues to struggle as a shortstop.

I cannot figure out why player positions with the White Sox organization are a mad scientist project for Guillen and Williams, as they continually move players around. Carlos Quentin seemed pretty comfortable in left field with the White Sox, yet they moved him to right and has not looked comfortable at all. Lord knows moving him back to left would be an improvement over Pierre,  as he is turning into a liability.

Ozzie, maybe Beckham could be the man if you just let him play where he feels most comfortable, instead he’s at second trying to learn a new position yet again this season.

In this weeks segment I think you lose Ozzie and Beckham is da man or will be in the near future!

One thought on “Who Da Man?”