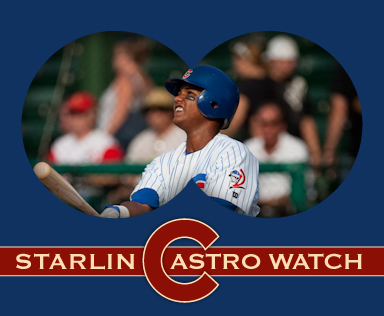 The wait is over—the Messiah is on his way to save the Cubs offense.

It’s being reported that Cub’s star prospect, Starlin Castro is being called up from Double-A Tennessee for tonight’s game in Cincinnati.

Considering the Cubs pathetic performance over the last few days in Pittsburgh, the move comes not a moment too soon.  Last night’s 11-1 massacre at the hands of the Pirates, one of the worst teams in recent memory, must have been too much for Cubs management swallow.

Castro has been destroying the baseball in the minors so far this year.  His .376 average and .990 OPS along with 20 RBI should be a welcome addition to the Cubs inconstant offense.  Defensively, the anticipated move of Ryan Theriot to 2B in favor of Castro’s stronger arm and larger range should be a significant improvement as well.

The move comes much sooner than a lot of people thought it would which suggests the Cubs’ brass might be in panic mode.  Such a young player (20 years old) may struggle at the Major-League level, but I think it’s a risk worth taking at this point.  I like this roll of the dice by Hendry & crew.  It’s still early enough in the season to do some damage in the NL Central.

One thought on “Wow, that was quick!”