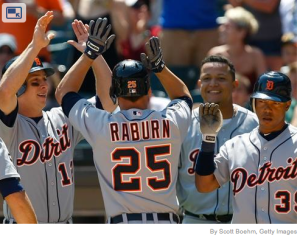 After Sunday’s loss to the Tigers I felt exhausted, part of that feeling could have been only three hours of sleep, but the Sox just have taken their toll on me this season. A game that started out with so much promise, should have never ended the way it did. Jake Peavy retired the first nine batters he faced, then in the fourth while running to cover first he injured his groin. Instead of coming out he tried to pitch through it; not smart. Not smart because he admitted to reporters he was pitching on one leg basically, which makes it pretty impossible to be effective. A call to the pen should have happen, not the shot to the pen by Ryan Rayburn that blew the game open.

The Tigers got the best of the Sox to take two of three and start another winning streak against the Sox at two games. No doubt about it for me that the Tigers are the better team. Do I still feel the Sox have more talent then the Tigers, yes, does that matter? No, if you do not know how to use it. Bottom line, no matter what stats say historically about players, they do account for what’s happening on the field, and the Tigers are winning and that makes them better than the White Sox.

Smitty was gracious enough on Sunday to reply back to a congratulatory text I sent him, “you know it’s still going to go down to the wire.” I guess I do, or is it just I think it will because it’s too early to give up. Kind of like, I know the Sox are a better than the Tigers, or I tell myself that because it makes me feel better. I guess we’ll know come September.