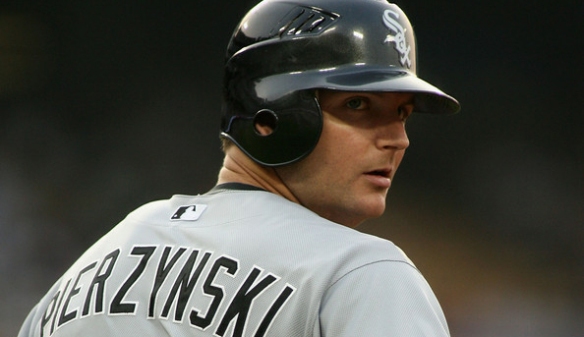 On yet another sun-splashed day in the bleachers at Wrigley Field back in May, I made a rookie mistake: I opened my big fat mouth without doing my homework. Fortunately, PV was sitting next to me in his best Sox gear, ready to put me in my place.

As A.J. Pierzynski confidently strolled to the plate to face Jeff Samardzija, I erroneously blurted out something about how A.J. was off to a shaky start in 2012—I guess I had just assumed the aging catcher was in decline.

I couldn’t have been more wrong. Pete patiently pointed out that he was hitting close to .300 and was off to a great start.  But little did either of us know how that great start would lead to Pierzynski’s best year ever.

To say that the 15-year vet is having a career year is as dramatic an understatement as saying Eva Mendes is kind of cute, Breaking Bad is a decent television drama, or the Cubs haven’t had much success in awhile. The 35-year old is absolutely obliterating his career numbers in almost every power category.

At the age when most players are in severe decline (especially catchers) his massive spike in production is more than remarkable—it is exeptional. Unfortunately, in today’s game, we’ve painfully learned it is also cause for suspicion and cynicism.

We don’t have to look far to find examples of why we should be skeptical.  After years of decline, Barolo Colon was having an inexplicable bounce back year that suddenly became very explicable with Wednesday’s news that he’s been suspended for PED use. Oh yeah, and there’s our reigning All-Star Game MVP, Melky Cabrera and his Malted Melk Balls you may have read about.

Now local radio personalities and national pundits have taken notice and reluctantly broached the subject in recent days. ESPN 1000’s Bruce Levine addressed “whispers of PED use” regarding Pierzynski on Waddle & Silvy earlier this week (the genesis of this post). Matt Spiegel from The Score wrote a column about it for the Daily Herald in which he says “A.J. Pierzynski is having a career year at 35? Start the whispers.” Fangraphs’ Howard Bender called Pierzynski’s 2012 performance “both impressive and an enigma” in his column last week. Jason Wojciechowski of Baseball Prospectus did a comprehensive study of catchers breaking out at age 35 in the entire history of the game and said Pierzynski has “accomplished something that it appears is fair to call unprecedented,” and compared his season to Brady Anderson‘s infamous 1996 campaign in which he suddenly (and very suspiciously) banged out 50 bombs. If that doesn’t raise an eyebrow, you must be Alopecian.

It’s sad to say, but a catcher having a massive breakout year at age 35 certainly fits the established profile for PED use. Considering the events of the last few weeks, I  won’t be overly surprised if we learn of yet another 50-game suspension in the coming months and hear the standard, hollow, boilerplate statement: “I apologize to the fans, to my teammates and to the Chicago White Sox. I accept responsibility for my actions and blah, blah, blah….”